I was able to play with the Cricut Expression 2 today and after viewing a few challenges, I am using a cute sketch from Card Patterns for my card. I will be entering the card in several challenges that are using a wedding theme this week. This is my take on the sketch and a wedding theme! The white card is 5 x 6 1/2".
Cricut Cartridges:
Cricut Solutions Wedding - Bells are third image on line 2 and cut at 2".
Cuttin' Up - Best Wishes is the main image on page 72 cut at 1.25 inch with pink and the shadow is the same size cut in white.
Martha Stewart - Swirling Lace Edge Punch
Paper - My Mind's Eye -pink stripe, The Girls' Paperie - patterned paper, K&Company -Pink ribbon, and Colorbok - white on the edge punch and bells.
Inking, pearls from my stash, and Diamond Stickles on the bells.

Challenges:
Card Patterns - Sketch 120
Fantabulous Cricut - Wedding theme - include the color white and a bell
Die Cuttin Divas - Wedding Bliss - any cut except for hearts
The ABC Challenge - W is for Wedding

I like Shabby Chic and Vintage and I was trying for that look with my wedding card. The patterned paper was my inspiration. Hope you enjoy!

I am sharing photos of the Red Hat Society mini album that Rhonda of SCRAP HAPPENS made for me! Rhonda is an amazingly talented lady who so generously shares her talents with others! She makes the most beautiful mini albums and then gives them away. Recently I was one of the lucky recipients of an album from Rhonda! I had mentioned a Red Hat theme and Rhonda sent me a gorgeous Red and Purple mini album with pages of beautiful ladies, hats, feathers, bling, and perfect sayings! 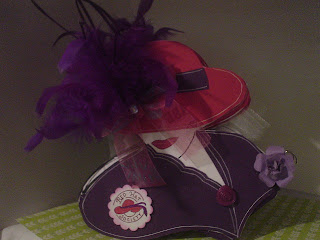 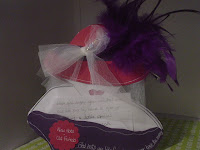 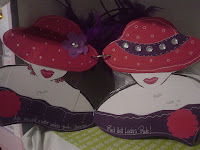 Ooh La La!
I love this mini album! Thank you so much Rhonda! It will always be a treasured keepsake! Also thanks to Rhonda for allowing me to use her photos on this post!
Be sure to visit Rhonda's blog to see more beautiful mini albums that she has made! She gives away an album each week!

First Card with the Expression 2

Yea! I finally was able to play with my Expression 2 during the last few days! I used the quick start guide, found an image, and made the cut. Everything seemed OK. After a little more playing with different images, the machine would not resize any images. I was so happy to see Christina had a video series on her blog Creations With Christina about the E2. I decided to go through the calibration again and that must have worked because then the images could be resized. Thank you Christina for your excellent videos!
I had a lot of trouble trying to update the machine too--took several hours and before it was completed, an error came up and said I needed to turn it off and restart the E2. After the second attempt for the update goofed again, I turned it off. The next morning, I tried again and succeeded with the updates in a very short time.
Well, not to be outdone, I made a card with my first cut! I chose the shoe on Cricut American Alphabet!! 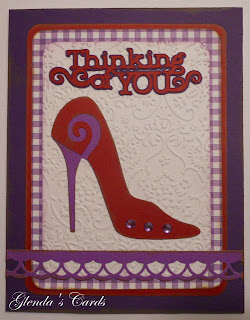 The white card is 5" x 6 1/2" and layered with purple paper. I used several more layers to bring in the red and purple theme! The shoe and the sentiment are from Cricut American Alphabet which was preloaded on the E2. I embossed the white mat with the Cuttlebug Textile Folder. I added a strip that had been cut with Martha Stewart Layered Arches edge punch. Recollections rhinestones add a little bling to the shoe. Actually, a hole is cut there on the image to see the shadow color, but I chose bling!!

I enjoy my first card using the new machine. Now to play some more! 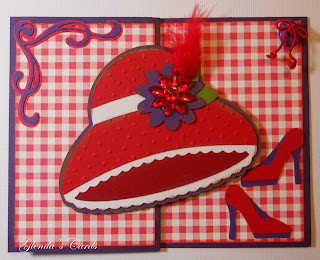 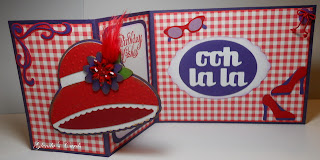 Cricut cartridges:
Forever Young - Hat page 57 cut 3"; "ooh la la" is the emblem feature on page 57 and is cut 2 3/4"; Shoes page 60 cut 1 1/2";  Sunglasses page 47 cut 1/2".
Home Accents - Corner1 is cut 2 inches. This key is the first image on the 3rd row.
Cuttlebug: Swiss Dots - Hat
Red and Purple papers are Recollection. White is Colorbok.  For bling, I added a red gemstone and feather on the hat and a button with Memory Thread in the corner. Birthday Wishes is one of the $1.00 stamps from Michael's. Red ink is Colorbok.

We are happy to have Peachy Keen Stamps as our sponsor. The prize for this week's challenge is Pk-470 Happy New Year Assortment! Now it is your turn to play with us! We want to see your Z-Fold Cards!

Hope you enjoy my card! 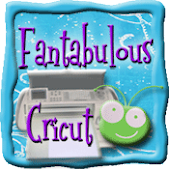